What's Your Parenting Style on Discipline 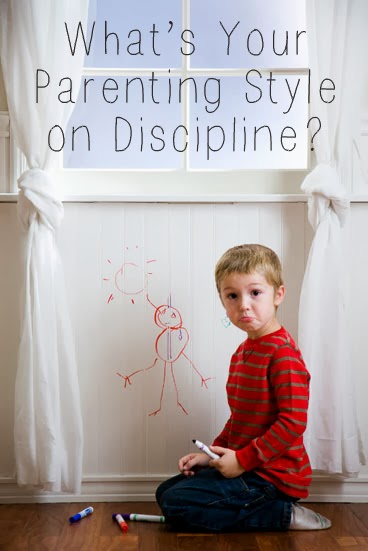 I know this post is treading on controversial ground among professionals as well as mothers, but with a fully active toddler discipline is a subject I'm constantly being faced with and something I'd like to throw out there for conversation.

So what do you do when your toddler throws their whole dinner on the ground because they don't want to eat it? When they hit you or throw a loud, screaming tantrum in the middle of the store because they aren't getting what they want? When are they old enough to start really understanding that something is wrong and at what age should disciplinary actions be taken to enforce what we are trying to teach them?

Shortly after Mia turned 1 and was becoming more mobile and talkative, these were the sorts of questions running through my mind. Since then I have learned from my studies and through watching other mothers that there are a lot of different views and opinions on the subject of disciplining children as they are taught right from wrong. Here's my two cents on the matter:

First off I'll just state this up front...I am pro discipline.Now I'm not talking spankings or yell even though I will admit there have been times when I have lost my cool and have ended up yelling at my kids. Saying this I would like to put out there that I recognize that I am not a perfect mother and that I am still learning. I also recognize that each child is different and reacts to things differently. Therefore, take this as merely my stance on the subject and my views on what has worked for me so far.

A quote from THIS address given by President James E. Faust states my views on the subject of discipline perfectly! "Direction and discipline are certainly an indispensable part of child rearing. If parents do not discipline their children, then the public will discipline them in a way the parents do not like. Without discipline, children will not respect either the rules of the home or of society."

So that being said, I think there comes a time in a child's age when there needs to be a consequence for their actions for them to learn that something is wrong rather then just stating that it's a "no-no". For Mia it was between 18-24 months. I learned that starting earlier rather then later is best. My method was putting her in timeout facing a designated corner after firmly explaining to her why she was now in timeout. Let me tell you how much I hate this stage of disciplining! Although I tried to be consistent, I felt like Mia wasn't grasping a thing I was teaching her even after some days feeling like I spent most of my time putting Mia in timeout. Just when I was loosing hope and thinking I was going to be the worst mother at trying to raise a decent and well behaved child (while trying to keep in mind that she was only 2) Mia finally started making the connection between her actions and the consequences. I think because we started a little earlier with trying to help her learn the consequence of her actions rather then thinking she was too young to grasp what we were doing gave her the chance to learn as she developed and began to understand new things quicker then if we started later. Granted she still is not a perfect child in always obeying nor do I expect her to be, but I do get that "proud mommy" moment when I see Mia obeying me and doing as she should.

To sum up what I've learned thus far:
- Read books, study up and seek advice on the topic of disciplining children but most importantly do what will work best for your child that will still be effective since you know them best.
- Start at a young age even if they don't seem to quite understand. I think it's better for them to grow to make the connect instead of trying to teach them later when in the past there has been no consequence tied to their actions.
-Try to really point out when they make progress however big or small. It warms my heart when I tell Mia how proud I am of her for being such a good girl and listening to Mommy and she gets all giddy with a big smile and yells, "Hooray, I did it!".
- Be consistent and push through!!! It's NO fun to discipline my kids, but I do it out of love in hopes that they can grow up to be respectful and obedient adults.
-Seek support. One day when I was feeling tired out on disciplining Mia and wondering if I was even doing it right I read a friends blog on the subject of disciplining her kids and it make me grateful that I wasn't the only one out there who was struggling with it and hated it.
-Something I am always having to remind myself...they're still just kids that are still learning and growing. Give them a break on the not so important things and try to just stress the things that matter most to you.

Do you believe in disciplining your children? At what age? And what are some things you've done that have worked to teach your children right from wrong? I would love to hear your answers and advice!

Linked To:
http://www.muchadoaboutsomethin.blogspot.com/2013/09/tell-us-tuesday-8.html
http://www.homestoriesatoz.com/tutorials/tutorials-tips-link-party-128.html
Posted by Hanna Caldwell at 6:45 AM