Christmas with the Caldwells

Before I can get to my New Years post, the documentation of our Christmas must be done!

We spend this Christmas with Eric's family in Vernal Utah. For those of you who don't know, Eric grew up with his Grandparents and they are also raising Eric's little brother William who is 7 years old. Because of that Eric's family is a lot smaller then mine, but that is why I love it! We always have a great time when we go to Vernal to visit Will and Eric's Grandparent and I feel like I can actually have a relaxing vacation without competing for bedrooms, a huge house of people and the drama of a bigger family. (Don't get me wrong I love my family to pieces and would never wish to trade them for any other family but, smaller and quieter settings are always a nice opposite.) Anyway, we were both excited for the trip to enjoy the holidays with family and to relax from school and work. I think Mia was also excited for the change of scenery and to get spoiled by Grandpa and Grandma! 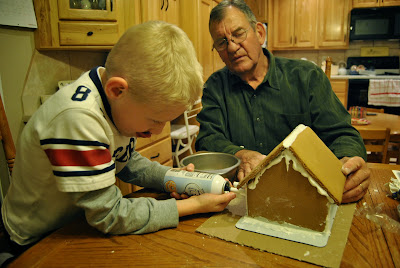 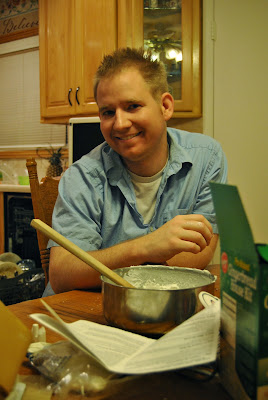 This tree was my little contribution to the gingerbread house along with helping put up the main structure of the house. 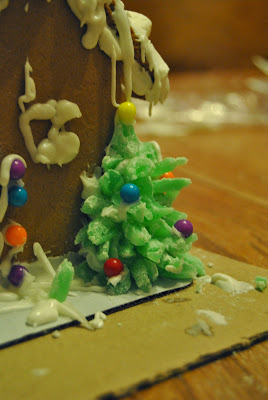 The final product...even though Will continued to add things to it clear into the next day. Let's just say it was completely decorated out! 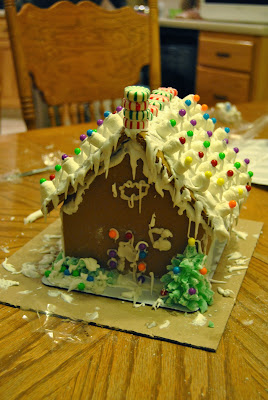 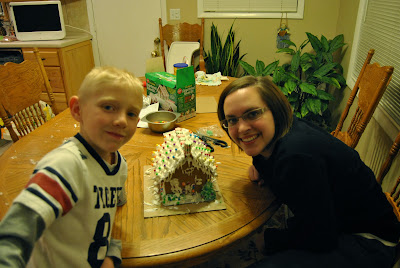 We just relaxed the couple days we had before Christmas and helped Eric's Grandma wrap presents, cook and played with our new xbox kinect. Christmas Eve Eric's aunt and uncle who live just down the street came over for dinner with their two daughters and the oldest daughter's boyfriend. Eric's dad was also able to make it for Christmas this year which was really nice because he had never met Mia until now. As with every holiday we ate yummy food but WAY too much and played games. Before bed we all got new pajamas to wear to bed, even Mia with the cutest little slippers!

Christmas morning, Will was up way before everyone else, but was held off from getting us up until Mia woke up around 7am. The living room was filled with presents and lots of new toys for Will which I wasn't use to see as everyone in my family is all grown up so that was a lot of fun!  Mia was just as surprised as I was and wasn't quite sure about all the stuff in the living room. She was kind in a daze the whole time with all there was to look at.

Mia with her new toy from Grandpa and Grandma Caldwell...she loves it! Please note her cute slippers! 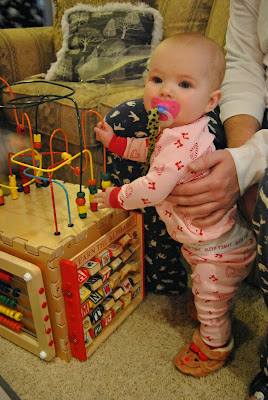 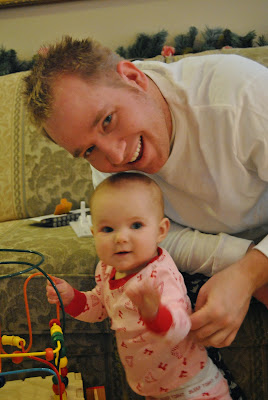 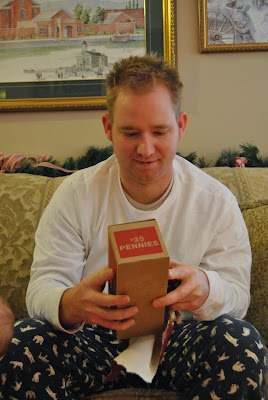 Eric is always good a spoiling me for Christmas and birthdays and got me my much wanted Kindle Fire! 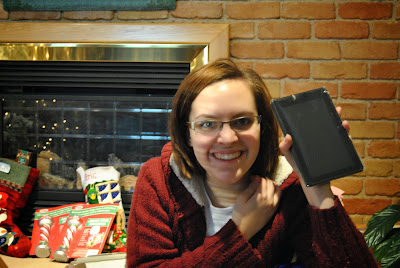 We all drew names for Christmas presents and I got Will this year. I got him a Cars 2 lego set although I had a lot of competition with all the other toys he got so I hope he like it. 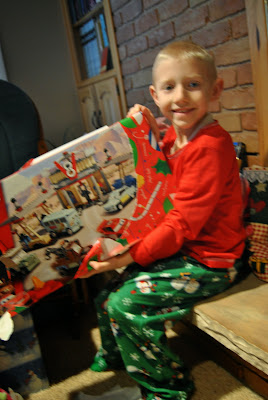 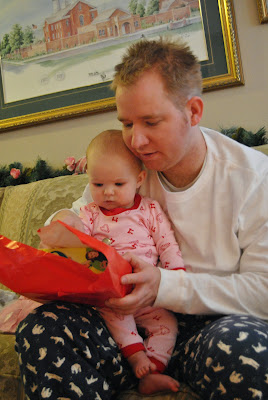 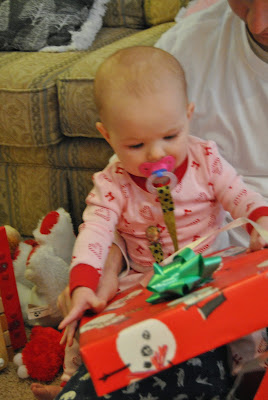 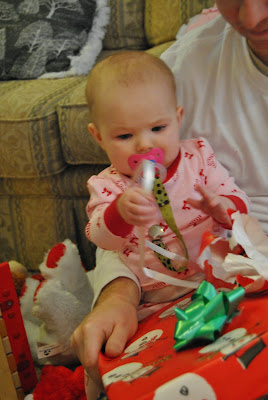 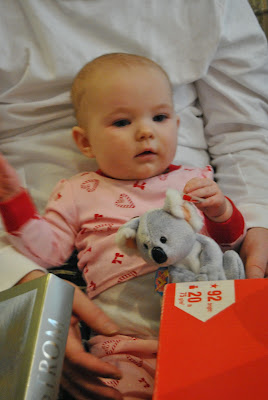 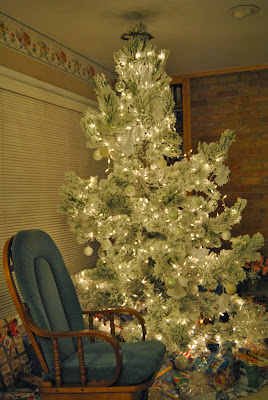 After opening presents we got ready for church  10:30 and had a big lunch afterwards and played the new games everyone got. It was a great Christmas and Mia's first!!!

As for other activities we did throughout the break we went swimming at the rec-center, went to the new Sherlock Holmes Movies, visited a Dinosaur quarry, Eric and I did a session at the Vernal temple, we attended a funeral for Eric's grandma's brother who passed away during the break (we were happy to be there to be a support for his Grandma!), played with our new Christmas gifts, tried out some of the local Vernal restaurants, and visited with family. 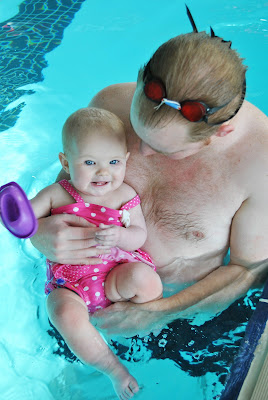 She had some toy boats that she would not let go of even when Eric was tossing her into the air. Needless to say she wasn't even phased that she was being thrown into the air. 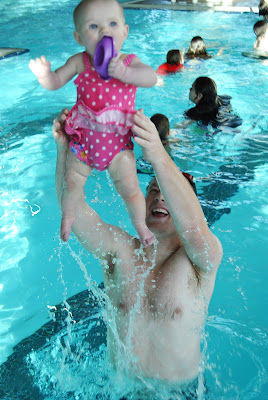 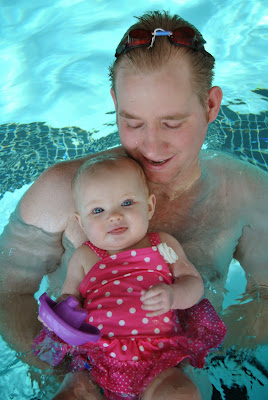 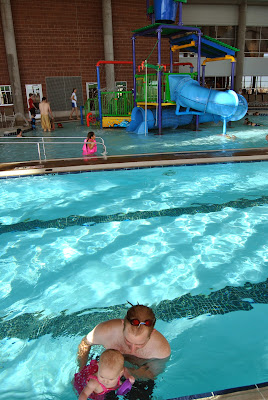 One of my favorite things about Mia right now are her kisses...yes they are super slobbery with mouth open and tongue out but it is just so cute that she will intentionally give people kisses. She's such a little sweet pea! 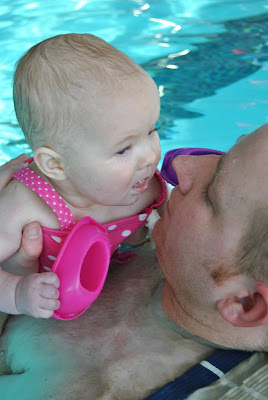 My two favorite people in the world!! 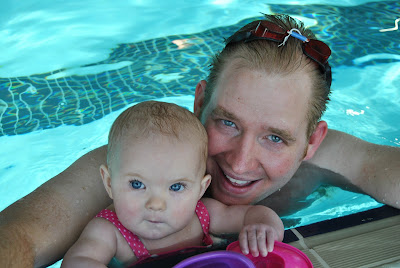 This was on the ride over to the dinosaur quarry. Will was making her laugh really hard. 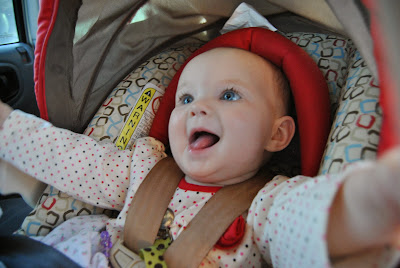 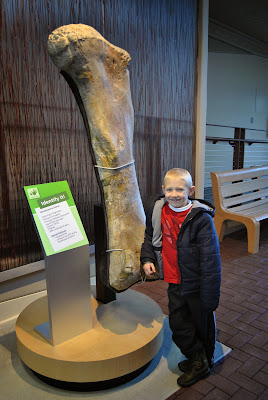 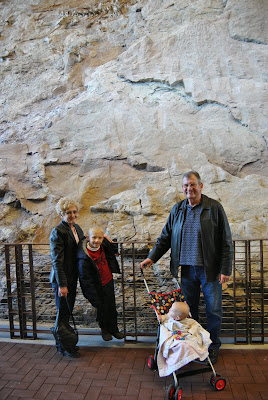 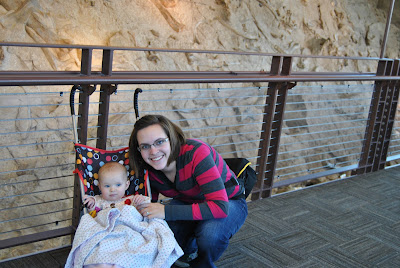 Mia had quite a time of her own, making huge strides in her development. While we were in Vernal she learned to crawl normally and all over, got better at pulling herself up on things and sitting down from standing up, had another tooth come in, and even got to try some new foods we experimented with by giving her little tastes of what we were eating for meals. She was her usual happy self and loved playing with Grandpa and Grandma and Will. He was constantly making her laugh.

We hope everyone had a great Christmas and New Year because we sure did!!
Posted by Hanna Caldwell at 8:56 PM